Classical composer and pianist Nathan Shirley was born in 1981 on the celebrated birthday of Russian master Sergei Prokofiev.

At the age of 21, Shirley composed Music for Strings and Marimba, a winner in the Andrzej Panufnik International Composer’s Competition in Poland. His piece Locorum Musica for flute and string orchestra was chosen in the First International Garden Music Competition in Krakow, and he later served on that competition’s jury. His chamber work In the Distance received 1st place in the Orpheus Music Composition Competition in Australia, and his piano piece Cultus was awarded in the Renee Fisher Composer Awards in the USA. His composition Annabel Lee was performed and recorded by the London Schubert Players, selected for their Invitation to Composers project sponsored by the European Commission Culture Program. And his composition Flesh and Bone, composed for marimba and timpani, was selected in the IronWorks Percussion Composition Competition in California.

Shirley is an active musician as well as composer, having performed his original music on both coasts of the US, in Europe, and live on public radio. Shirley’s concerts are often opened with an improvisation, in homage to the great composer-pianists of centuries past. On the side he enjoys accompanying silent films with original music created on the spot.

Shirley improvised naturally at the piano when very young, but began formal lessons around age 10. In adolescence he discovered classical recordings (in Walmart’s discount CD bin) and spent countless hours listening, composing, practicing, and improvising at the piano. Russian music heavily influenced his style in both composition and piano performance. As a teenager he was mentored in composition by Olga Harris, the last student of Khachaturian. At age 17 he received a composition scholarship and almost immediately after leaving school won his first international composition award, traveling to Europe for its premiere.

Shirley’s influences are very broad, from the interwoven counterpoint of Bach and the rhythmically driven harmonies of Vivaldi, to the exquisite lyricism of Chopin and Schumann, to the wild ferocity of Stravinsky, Prokofiev, and beyond. His cross-cultural style reflects a strong interest in international folk music, including the exquisite timbres of Balinese gamelan, beautifully dark Roma and Eurasian melodies, complex and layered African rhythms, highly expressive and ornamented music of Persia, and the intense, passionate music of Latin America.

Shirley has composed about 200 works for children, and has taught piano, including improvisation and composition to many students. In Western North Carolina he has worked with hundreds of public school children, introducing them to classical and world music instruments, leading them in group percussion performance, teaching the science of sound, and exposing them to classical masterpieces through active listening. He has also developed a method of group music education using inexpensive “Pipe Bells” which he designed to teach young children to read music. Working with children has influenced his composition style and has helped develop in him a strong instinct for accessible and engaging music. Shirley is also the author of Piano Revealed, a 7 book piano method series.

Shirley has written for independent film, animation, theater, and ballet, but composing for the concert hall is his first love. He began accepting commissions for new music in 2005, and has since written for musicians around the world.

Nathan Shirley lives in the Mountains of North Carolina with his wife and children and is a former president of the Asheville Piano Forum. He works as a freelance composer and performs his compositions in the now rare composer-pianist tradition of Mozart, Beethoven, Chopin, and so many others. His sheet music is published through Marysyas Music, Orpheus Music, ScoreVivo, SuperScore, and much more is available at IMSLP.org. CDs and a DVD are available as well. 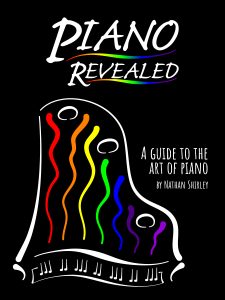